The cost of insuring an electric car has tumbled by an average of £97 year-on-year across Q3, according to new research by comparethemarket.com. The substantial drop comes as the average premium for traditional petrol and diesel cars has also fallen by £82 in the same period.

However, this gap in the cost of premiums has narrowed from Q3 2020, when electric vehicles were £48 more expensive on average to insure than traditional cars. Car insurance premiums have plunged in recent months suggesting insurers are competing more aggressively to win new customers ahead of the introduction of new FCA pricing rules in January 2022. 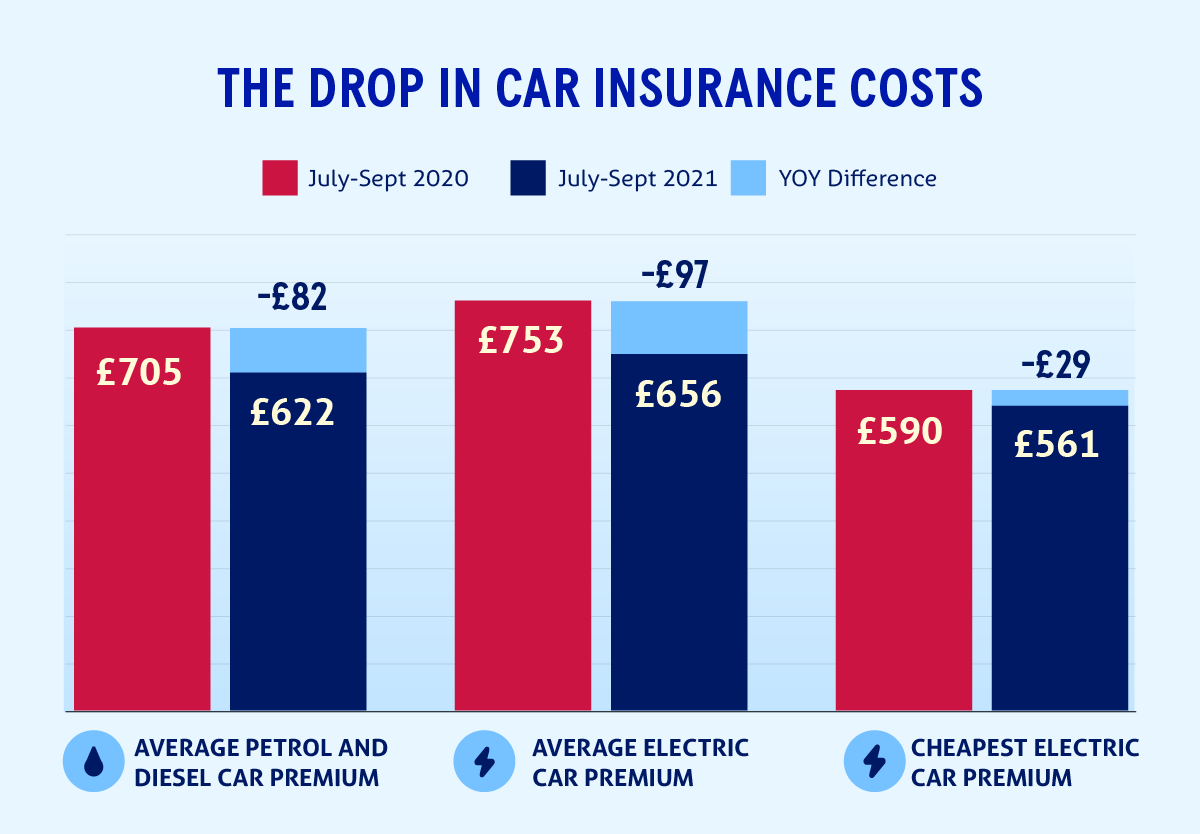 However, the slightly higher cost of insurance for electric vehicles shouldn’t put drivers off from making a greener choice. Savings can be made on road tax which does not need to be paid on cars that do not emit carbon and cost less than £40,000. Drivers can also receive a grant of up to £2,500 from the Government when purchasing eligible electric vehicles with a price tag of less than £35,000. In addition, significant savings can be made on fuel, one of the largest expenses for drivers of petrol and diesel cars.

Electric car drivers can also cut the cost of insurance by switching to the cheapest deal available. On average, the cheapest annual premium for electric cars is £561 in Q3 2021. This means drivers could save an additional £95 by shopping around for the best deal when their policy comes up for renewal.

Electric cars have substantially grown in popularity in the last year, with September data from the Society of Motor Manufacturers and Traders indicating that sales of new battery-powered electric cars have surged by 87.9% in the year to date. These electric vehicles represented 9.5% of all new car sales in this period, increasing from 5.4% in the previous year.

Ursula Gibbs, director of comparethemarket.com, commented: “Electric cars are rapidly growing in popularity, making up around one in ten new car sales. Drivers who’ve made the switch from a traditional car will be glad the cost of their insurance has tumbled. Electric vehicle owners will also benefit from substantial savings in fuel bills and tax – as well as doing their part for the environment.

“Insurance has become less expensive ahead of the FCA’s new rules which come into force at the start of 2022. The regulations ban insurers from offering new customers lower prices than existing ones, so insurers may be particularly keen to attract new customers ahead of this deadline. However, motorists may lose out on these savings if they choose to auto-renew their policy. One of the best ways for drivers to take advantage of the situation is to shop around for a cheaper deal when their policy ends. Our figures show electric vehicle drivers could typically pay £192 less than last year if they switch to the cheapest deal available.”

A glimpse into our PVT project with @UniWestLondon, @Ameresco and @JKNRenewables, which is thought to be the largest of its kind in the world 👇 https://twitter.com/kaPOWed/status/1468594408958349312

Looking forward to this session on role of hydrogen tomorrow with colleagues from @CadentGasLtd @heatingatwork chaired and organised by @elementalexpoUK @burohappold #lowcarbonheat #heat #hydrogen #netzero https://twitter.com/burohappold/status/1467811074573586436

Find out more at the webinar on Thursday 9 December at 12:00 (GMT), through the link below.