Net zero energy goals for heating need to be owned and delivered by regional and local governments, according to a new report led by the University of Birmingham.

The report – ‘Pathways for Local Heat Delivery – emphasises the need to balance on-the-ground local decisions with long-term policy decisions from Government. For example, it calls on the Government to fund pathfinder projects that will decarbonise 30,000 homes in the next five years and recommends the sale of natural gas boilers in the UK be banned by 2035.

Professor Martin Freer, Director of the Birmingham Energy Institute, will be talking about the report at this month’s InstallerSHOW, and free tickets are available here: installer-2022.reg.buzz.

It highlights that to implement clean heat technology successfully will require a clear strategy backed by sufficient investment – and at the heart of that should be statutory targets for local authorities backed by resources to map existing technologies and engage with local communities.

The Policy Commission was led by researchers at the University’s Birmingham Energy Institute in collaboration with the Energy Research Accelerator.

It was chaired by Sir John Armitt, chairman of the UK’s National Infrastructure Commission, who said:

“British policy on heat decarbonisation needs a reset. The keys to this are simplicity, place and funding. Low carbon-heat is an inherently local challenge, with decisions about technologies and infrastructure varying by neighbourhood. It makes sense that councils lead this process.

“At the same time, the national approach has grown too complicated and needs streamlining. Again, the way to do this is by devolving decision-making to local governments.”

Alongside the call for decision-making to be devolved regionally, are a set of recommendations on thermal efficiency, including proposals to overhaul both the way thermal efficiency is calculated, and the system of grants and loans available.

Sir John Armitt added: “Getting on with efficiency improvements regardless of a ‘final heat solution’ is a no regrets move which will create jobs and reduce demand. To implement this, we need simple policy and support mechanisms.”

The report also recommends that the Government fund at least three major pathfinder projects within the next five years to test ways of decarbonising entire neighbourhoods.

One such pathfinder programme could be located in East Birmingham, where there are high rates of fuel poverty, combined with housing stock that mirrors the national picture in terms of different housing types and ages. In addition, the area has excellent local heat resources including a large untapped waste heat resource at Tyseley Energy Park.

Professor Martin Freer, Director of the Birmingham Energy Institute, said: “The Government needs to invest in these large projects to learn how to retrofit and decarbonise neighbourhoods at scale. The way to find out how to do that is to start doing it. At some point we have to commit – that time is now.”

Pathways for Local Heat Delivery, a new policy commission from the @unibirmingham & @energyRA was launched in Parliament this week, calling on the Government to ban the sale of natural gas boilers in the UK by 2035 to support low-carbon heat transition.https://t.co/cwh0EfxODO pic.twitter.com/lOkH1FmB0t

Other recommendations made within the report include:

E.ON is supporting a project by the University of Birmingham to create a National Centre for the Decarbonisation of Heat, which aims of create a central hub for training and education in low-carbon heating and renewable energy in the West Midlands. The centre would support ongoing training and development on decarbonising the area, as well as improving the homes of fuel poor customers, by introducing new technologies and educating people on how they can reduce their energy costs.

Michael Lewis, Chief Executive of E.ON UK, said: “Greening our economy is the solution to our economic and energy issues now and for the long term, and the decisions we take in the next few years will determine our ability to meet 2050 zero carbon targets.

“This report calls out the need for key reforms which are essential for decarbonising whole communities and supporting the transition to zero carbon. It’s vital we take communities on this journey, to educate them on these new technologies and overcome any barriers we face. Allied to that, a new National Centre will support local employment and provide many of the heat pump engineers we need to scale up this important sector.”

Sir John concludes: “The challenge is that over the next 25 years we have to change our heating systems in 24 million homes. That can only be done with clear policies and local planning and delivery. The next five years are critical to developing a full understanding of technologies and networks.”

Professor Martin Freer will be in the elemental Decarbonising Buildings Theatre at InstallerSHOW, talking about the findings of the report. 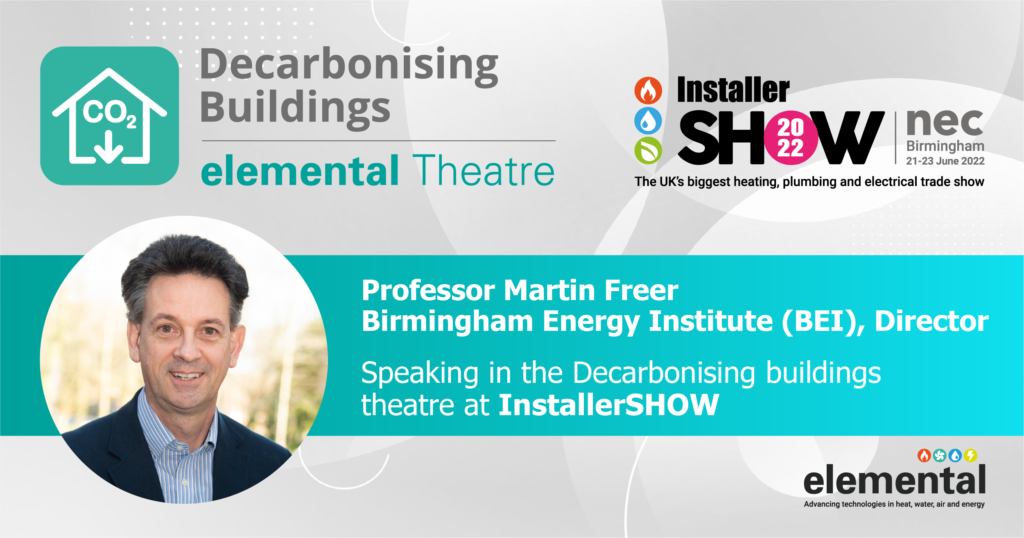 Highlights from the first day of elemental at InstallerSHOW

1/2) Did you see our MD Phil Hurley at @elementalexpoUK's Decarbonising Buildings Theatre earlier this week at the @Installer_Show?

In his speech, Phil discussed NIBE's recent #lowcarbon project with @Ameresco and @JKNRenewables for @UniWestLondon.

Catch the highlights below.