HomeNewsEnergyReport into driving the growth of local energy

Report into driving the growth of local energy

A report into the growth of local energy has been published – by UCL researchers Nicole Watson, Dr. Gesche Huebner, Dr. Michael Fell, and Professor David Shipworth – and is available to read here (free until 22nd November).

This extract was written by Nicole Watson, Ph.D. Student, UCL Energy Institute, and originally published on the UKERC website.

As we move towards a flexible, greener electricity system, new actors are entering the UK energy market. Among these are local energy suppliers: locally owned companies providing customers with electricity generated from renewable sources located close to the homes and businesses where it will be used.

Local energy is increasingly viewed as having a key part to play on the path to Net Zero. As well as supporting decarbonisation, it can also have social benefits, such as strengthening community relationships, empowering consumers, and helping those in need.

However, the ‘supplier hub’ principle that governs the energy market has been criticised of acting as a barrier to models such as local energy. The supplier hub model puts traditional suppliers at the heart of the market, with consumers having one energy supplier at a time. Ofgem and other industry actors are beginning to question whether it remains fit for purpose as the energy system becomes more decentralised.

Two energy suppliers are better than one?

One proposed solution is a multiple supplier model. This would allow consumers to ‘add on’ local or specialised suppliers, with their current supplier meeting the rest of their electricity demand. Some argue that allowing multiple suppliers is valuable for opening up the energy market for models such as local energy. Others, however, raise concerns about how the complexity of multiple suppliers might impact consumer engagement. 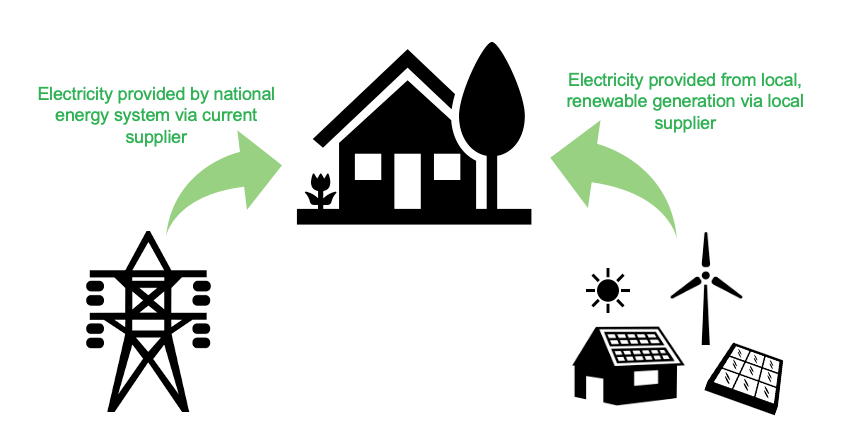 The first experiment in the study looked at the willingness to engage with local energy suppliers in a multiple supplier model.

In the ‘multiple supplier default’ group, participants were told that they had been automatically enrolled on to the ‘combined provider’ offering and that they had to take action if they wanted to switch back. Only 16% chose to drop the local energy services and actively switch back to their current tariff. This suggests consumers are not averse to multiple suppliers – or at least not willing to take action to avoid them.

More strikingly, however, in the ‘active choice’ group, where the effort of engaging is the same for both options, 78% chose to add on the local energy supplier.

An even more surprising finding came from the ‘single supplier default’ group, where participants had to take action if they wanted to add the local energy supplier to their tariff: 57% chose to actively engage. These findings are a promising indicator that consumers are willing to interact with multiple suppliers – and actively prefer local energy options. 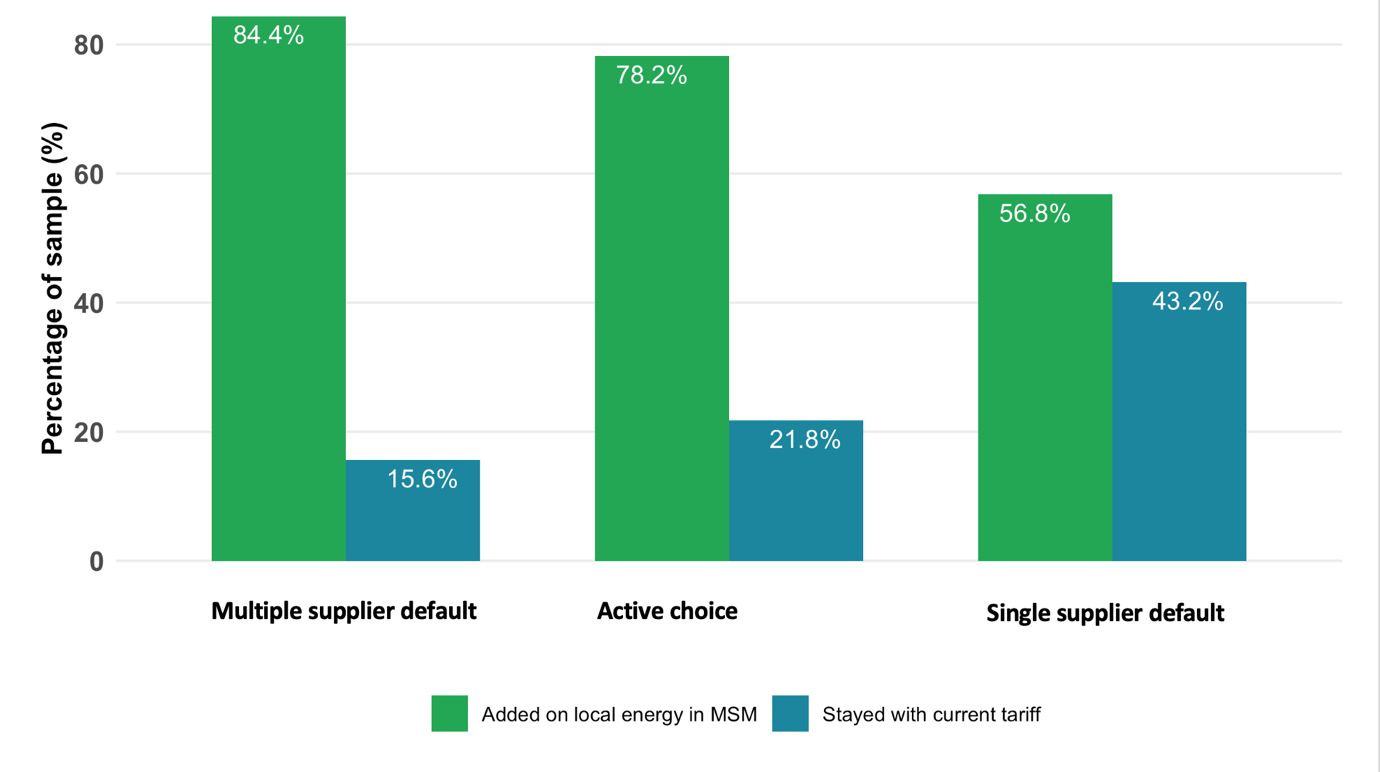 The second experiment explored whether consumers would be more likely to engage with a local supplier in a multiple supplier model or under the current supplier hub model.

762 participants were randomised into two groups and asked to imagine that they had received a letter from a new local energy supplier advertising their services. 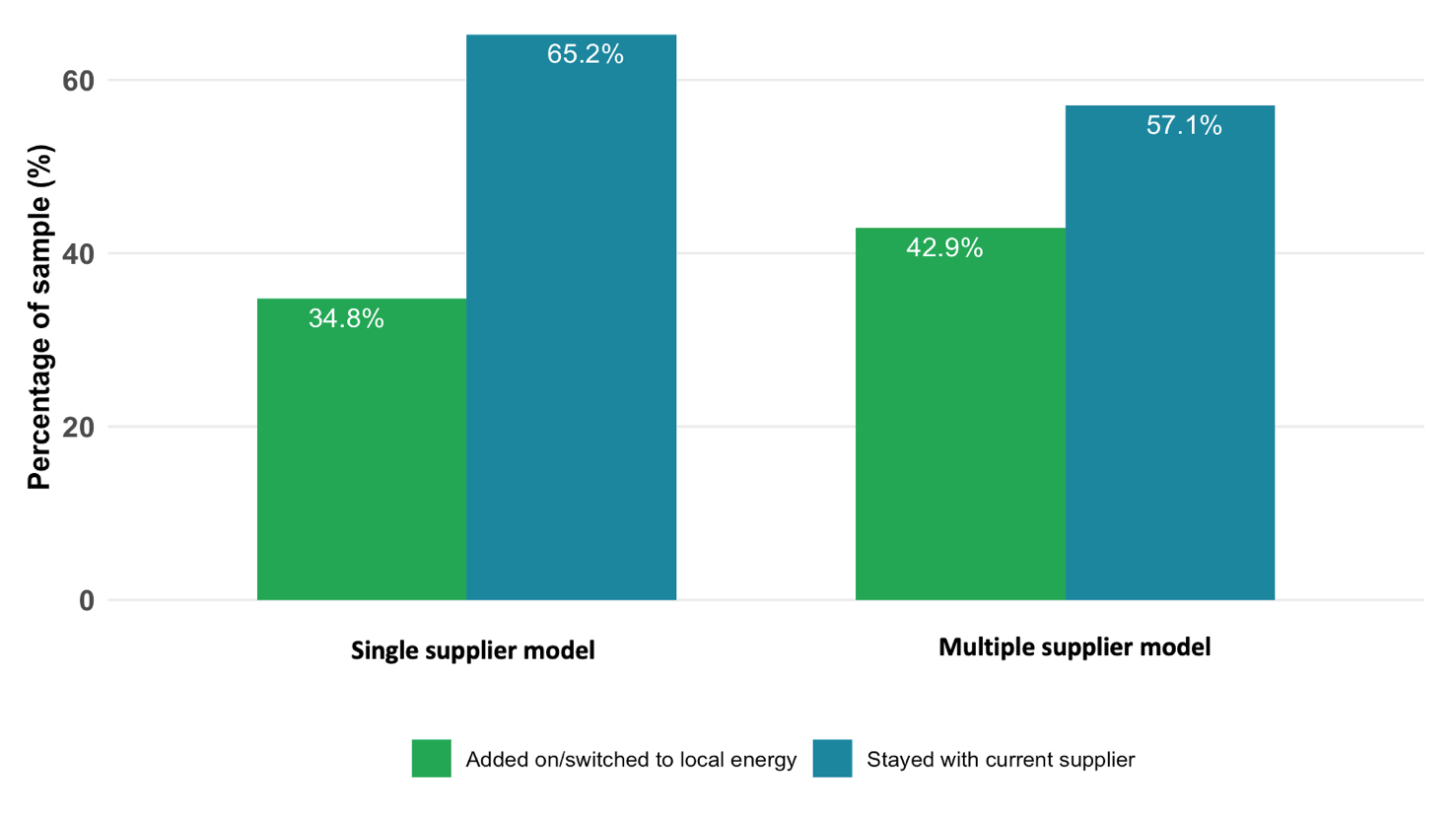 Contrary to fears that multiple suppliers would increase consumer disengagement, these findings suggest that consumers can not only cope with multiple suppliers but are more likely to engage with local energy when they can keep their current supplier as a backup.

Although this wasn’t something the study explicitly set out to test, engagement was much higher when participants were contacted by their current supplier in the first experiment as opposed to a new local supplier in the second. This exploratory finding suggests that the cooperation and support of existing suppliers is likely to be important if multiple supplier models are to gain traction.

Much more work is required to build the evidence base. Nonetheless, these results offer hope that multiple suppliers could drive the growth of local energy and open up opportunities for innovation in the British energy market.

WATCH: The art of the possible – IOT and automation in buildings